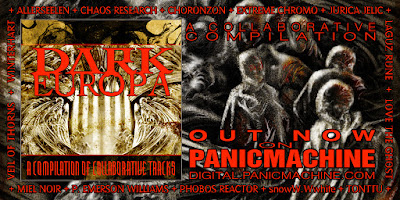 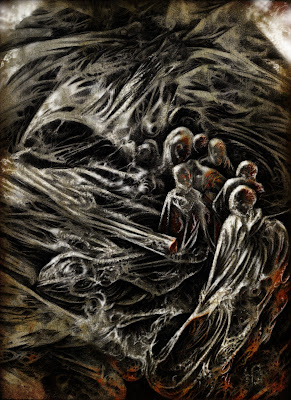 Posted by PANICMACHINE at 6:34 AM No comments:

A Music Section Has Been Added

We just added a music section to the site where you can stream or buy downloads of many albums. Some of these releases have been given some loving re-mastering treatment and keep checking back for some exclusive and some free releases. This is just the start.

Posted by PANICMACHINE at 2:21 PM No comments:

We have Choronzon - Ziggurat of Dead Shibboleths, Veil of Thorns - Necrofuturist, Veil of Thorns - Salon Apocalypse available on CD again and more coming. Watch out for Choronzon - FIAT NOX on CD and a brand new releases from the infamous SLEEPCHAMBER, called SCOPOLAMINE, which includes one P. Emerson Williams among performers.

Hie thee hence to innerxmusick.com and check it out.
Posted by PANICMACHINE at 8:06 AM No comments:

Joseph Matheny in conversation with P. Emerson Williams and a new episode of In Your Ear, in which Psuke reviews Transpondency.

P. Emerson Williams is a visionary artist and illustrator, whose work has been displayed in galleries and events in Norway, Scotland, Boston, New Orleans, Salt Lake City, Florida and London. His illustrations have also appeared in countless publications, as the artist in residence at Ghastly magazine and as the illustrator for many other Goth and occult publications from California to Virginia, and Lithuania, England and Finland to Colombia, as well as covers for sevel titles from Original Falcon and Leilah Wendell’s book «Necromance». His art can be seen on the front cover of SLEEPCHAMBER’S return to action release “Socery, Spellls, and Serpent Charms”, as well as the Zewizz tribute releases “That’s Romance” (both part 1 and 2). He is a core member of FoolishPeople starting from London productions of Cirxus and The Abattoir Pages and continuing with the forthcoming A Red Threatening Sky on other projects in the works.

Williams’ experimental Gothic.Industrial act VEIL OF THORNS is approaching the twenty year mark in their career, and they continue to build on an ever expanding palette with «salon Apocalypse» and «Necrofuturist». Veil Of Thorns began as a Goth band in the early 90’s club scene in Boston but steadily moved toward a more eclectic sound. Not afraid to use any influence – you will hear styling’s of goth, hip hop, industrial, classical, and just about the whole kitchen sink. In 2009, VEIL OF THORNS formed a creative alliance with Inner-X-Musick, the label and music distributor run by the infamous John Zewizz of SLEEPCHAMBER fame.

Coming to fruition in 2010 are two releases from CHORONZON, P. Emerson Williams’ chaotic project whose twin roots lie in industrial and black metal music. CHORONZON, began as two separate and entirely unrelated projects with the same name: the eastern half was a Boston/Florida based black metal-styled band formed in 1986 by P. Emerson Williams, while its western counterpart was the San Francisco old school industrial project of Demimonde Mesila Thraam. In 2002, the two respective CHORONZONs became aware of each other via the internet, and agreed to share use of the name, before going still further and collaborating musically.

Prior to the merging of CHORONZONs, the East Coast CHORONZON released of a series of self produced cassettes before being signed to the record label Nocturnal Art Productions in 1998, and released the album «Magog Agog». Three more albums followed, in which the sound moved further away from conventional black metal into industrial and experimental territories. The first release from the conjoined CHORONZON was the double album New World Chaos, produced in 2005.

If that is not enough, P. Emerson Williams has more bubbling under the surface. Keep an eye out for renewed and exponential activity from kkoagulaa and Mythos Media in the coming year and the move of Necrofuturist {TRANS}_Mission, his radio show on Radio Nightbreed from web streaming to Sirius/XM sattelite radio.

Posted by PANICMACHINE at 8:37 AM No comments:

Pazder died suddenly and unexpectedly in his home in March of 2004 of a heart attack. Smith still lives in Victoria. Michelle Remembers is out-of-print as of 2006.
Posted by PANICMACHINE at 8:16 AM No comments: