Between 1985 and 1996, she worked as a vocalist and keyboardist in the band, appearing on albums including Children of God (1987), The Burning World (1989), and Soundtracks for the Blind (1996). Jarboe's inclusion in the band marked a departure from their previous noise rock sound to a more melodic industrial and even folk rock sound. She also collaborated with Gira, forming their side project, The World of Skin in 1987, releasing several albums and singles.

Jarboe left Swans in 1997 when the band broke up and embarked on a solo career, releasing various experimental records (many of which she has self-released and distributed over the internet)[10] including Sacrificial Cake (1995) and Anhedoniac (1998). She has continued to self-release solo albums and, despite not returning to the group, recorded vocals for two tracks on the re-formed Swans' album, The Seer (2012).

Posted by PANICMACHINE at 10:17 AM No comments:

Many, many thanks to Raul Alvarez for adding the Veil Of Thorns track Dreams Name You to The Cyberpunk Playlist (Post Punk, Dark Wave and Witch House)!!! 7+ hours of necrofuturist grooves & shadowy moods. Check it out! 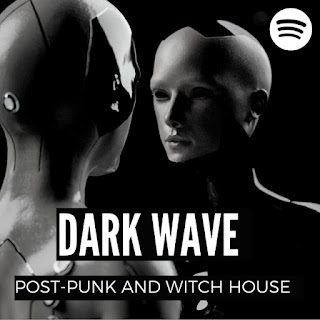 Posted by PANICMACHINE at 8:31 AM No comments: