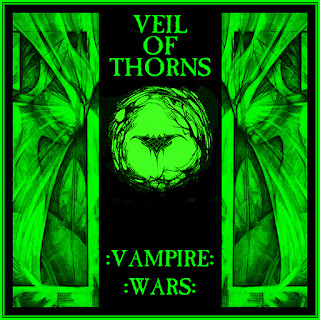 We have the CD of the Vampire Wars album available now for a special price of $5. You can go purchase the CD here.

A huge thanks to those of you who have downloaded this album and shared it with fiends & foes. We’re proud to find that as of this week, more than 6,000 of you have downloaded it. (Not counting the music blogs and Russian file sharing sites. They use their own uploads and we have no way of knowing how many downloads, or even how many sites are hosting this release by now.)

Of course, the free download option will continue to be available for as long as the sites and trackers hosting them exist.

Donate and help bring Necrofuturist media production to the next level. Free music and other media will be forthcoming.

Posted by PANICMACHINE at 5:59 AM No comments:

THE WALTZ (and other atrocities)

Posted by PANICMACHINE at 7:43 AM No comments:

The Swami under the bridge sends his sound outward to heal all our souls. The words of Swampa are there. Tell me what he says.

A psychedelic trip in a country setting.

Posted by PANICMACHINE at 5:54 AM No comments: