Scarified vocals sprawl across the densely packed shuffling ‘Thought Pollution Evolution’ and you can sense there’s an eagerness to be freshly mangled, the triphop and dark atmospherics come whispering and whistling, not gnashing or self-eviscerating. No ideas what it’s about but the mood is strangely contagious. When ‘Through The Fire’ also limbo dances under the tension-free guitar barbed wire you know we’re in for some fun, and this is another unusual but invigorating track. As our relieved and seemingly addled host guides us through ‘Standing’ it’s light, engaging and gentle. Then we fall into ‘The Vandals Exquisite Corpse’ and it gets a wee bit trickier. That’s a slithery mindwarp of a thing, the sounds clattering and rustling, only for ‘The Lifeless Trio Kept Playing’ to be an idyllic segment, and ‘Wailing In Glass’ warped rockist fare pootling along, gradually dispersing into sub-atomic ambient mulch. So, the whole world is here.

A brief ‘Waltz’ verges on blistered Americana, ‘Pleasure In Nightmare’ keeps circling, bathing in its own perspiration, before an equally intoxicating ‘Giving Ascent’ digs in deftly for some dancey machinations, with a discreet sense of fun rather than flashing the rhythm around. Here we are in fertile dark indie territory, both filmic and mood-enhancing. ‘Dancing Revelation’, of course, moves away sideways, lightly aggrieved instead of inclusive. ‘Let Loose Into That Good Mourning’ is an interestingly gloomy soundscape where the machines seem to have won but find themselves down in the dumps. ‘The Reflection’ is the opposite, a lazily beautiful twilight night sky, with ‘Deny Fascination’ just as inviting, for all the disguised vocal intent. Things have got looser for a while in the VOT world and relaxation does wonders.

They do appear to be dropping slowly into the abyss for the groaning ambient doldrums of ‘The Only One Left’, like whalesong at closing time. In the skittish ‘Die As One’ it’s all very clandestine and chilled, the energy locked down tight as it bustles past on an espionage-fuelled mission.
‘Entertainments Subsume Concern’ sounds like a panel show doomed to failure, and it does appear to sound like a repair man trapped inside a cathedral organ, trying to fight his way out.

We’re into gloopier electronic sounds as ‘Head Up Get Out’ wibbles around over a toxic bassline and we’re ushered out by ‘The Dead Channel’ which is more restrained but shadowy fare, vocals unwelcome visitors in an imposing room staffed by jazz-obsessed ghosts.

Definitely one of the weirder Veil Of Thorns offerings, because of its orderly approach, and really quite lovely.

Posted by PANICMACHINE at 7:56 AM No comments:

From our friends at Culture Asylum Magazine.... 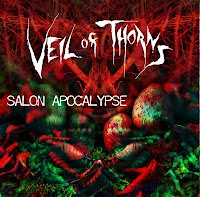 (Inner-X-Musick): How do you describe P. Emerson Williams' work when it comes to Salon Apocalypse.  It is a mixture of experimental, gothic, and industrial.    Williams' vocals are calm and pronounced and clear even dreamy in a lot of ways.  They are soothing in parts and often the music is an experiment into the mind's eye.  This is experimentation that isn't overwhelming, rather, it takes one into the realm of dreams and information.  This is a very intellectual release that is powerful each track scratching at your very soul.  There are some club elements mixed into the many layers of industrial and experimental: a true journey unlike any other in this arena.  P. Emerson Williams is a true visionary and people should take notice to quite an incredible release.  Feel the emotion and witness the the beautiful nightmare waiting for you.
Culture Asylum Magazine
March 2010

Purchase Cultural Asylum Magazine HERE
Posted by PANICMACHINE at 7:48 AM No comments: There is a theme, but an as yet nebulous one. I'm pulling together phenomena and experiences connected with art movements of the last hundred years and the corresponding societal upheavals that ran concurrently and which had an enormous impact on the birth, life and death of those art movements.

At the same time, I'm meditating on the similarities and interconnectedness of art and cultural groups and cults, magickal groups, religions, philosophical paradigm shifts and the growth they spur as well as the devastation they leave in their wake, both psychick and materially manifest.

And there's a book I'm desperately looking for, don't know the name of it, but its effect on people who read it seems to have been similar to the fictional King in Yellow.


This item is part of the collection: Ourmedia

Posted by PANICMACHINE at 2:32 AM No comments: