T'was a Turning Point and Prophetic of 2020: Salon Apocalypse

Much of the work of Veil of Thorns and of Choronzon are from the point of view of one being overwhelmed by an onslaught or a flood. This stems from a feeling and repeated visions and dreams starting at the beginning, making it hard to keep to conventional modes of production. How to express warnings and create lines of flight out of the Spectacle without being reterritorialized and thrown back into the machine? The isolation of those who are not idiots insisting on spreading disease as far and wide to prove to themselves that they are of the privileged who will not be ground up in the impending fascist era and witnessing the suicidal madness of the normal machinic direction of gluttonous capital permeates the feeling of this release.

04. And The Beast Of The Vision Still Roams In Dreams

About Veil of Thorns 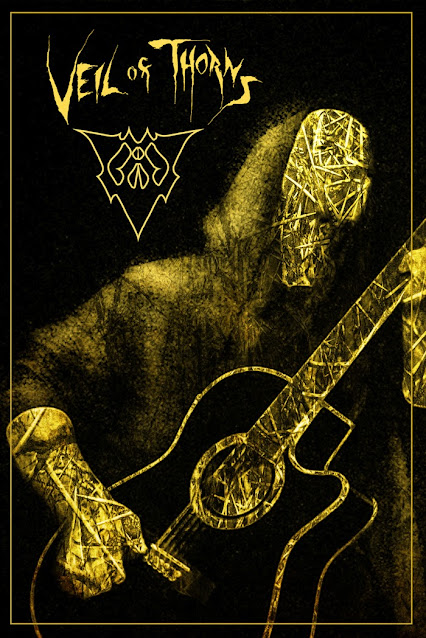 Veil of Thorns is an ever evolving concept born of the fevered brain of P. Emerson Williams. Among the growing list of

collaborators one can find authors, actors and musicians of many genres, reflecting the scope of what P. Emerson 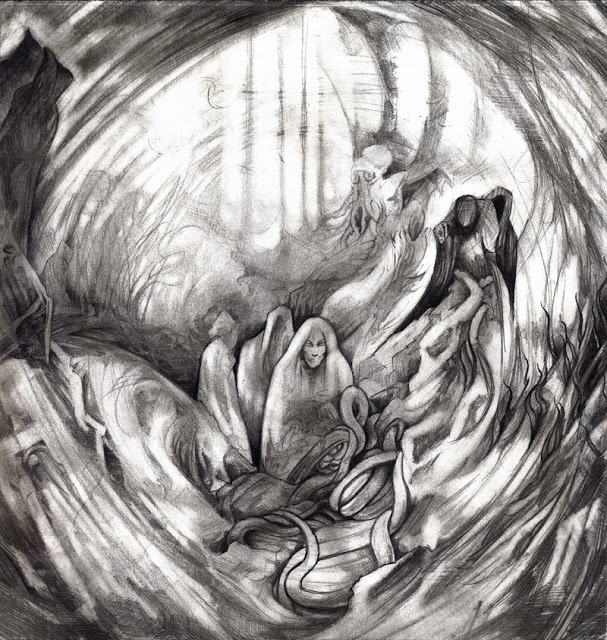 Both "Salon Apocalypse" and NECROFUTURIST grew out of the process of working on “The Abattoir Pages” as part of FoolishPeople. The intention was to finish “Salon Apocalypse“, as the concept I had been working with for this release was in the same realm that John Harrigan tapped into for “Abattoir Pages“. Through countless sleepless nights and days of madness, “Necrofuturist” wrote itself as a further expansion of the studies and current we were working with. I would not have chosen to take on so much in such a short period of time, but I really had no choice in the matter.

“Salon Apocalypse“, “Necrofuturist” and “Abattoir Pages” are inextricably linked, through current and source materials, all preparing the ground for a future work, for which all this work is a mere prologue. 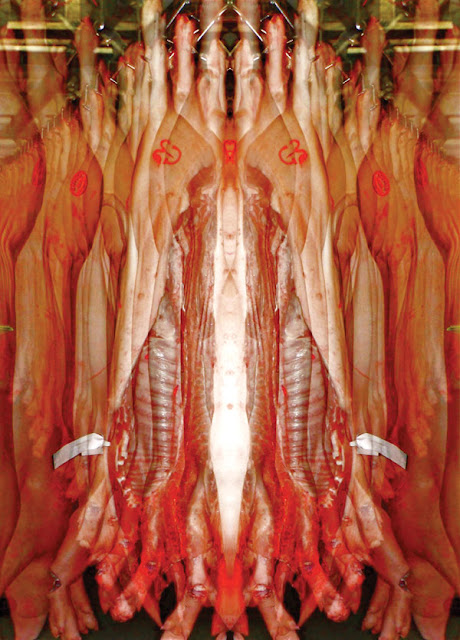 "Both releases are giant steps in a direction one would not have suspected after “Cognitive Dissonance“. In fact, as I go through the Veil of Thorns catalog – this is close to the shift that occurred with the 2003′s “Birthed“." - The Other Sound Magazine

It’s a masterpiece from beginning to end. P. Emerson Williams is brilliant. He is a master musician whose ability to dive into the darkness – while remaining a musician, is unprecedented in our modern age. Where other artists like to rely on shocking lyrics, or cool effects… Williams writes good musick, and plays most of it himself – again “masterfully”. “Salon Apocalypse” is a aural drama played out for your ears. It weaves in and out of a apocalyptic story line that is just out of reach… The musick… ah, the musick. It’s out of reach to. Death Metal, ambient, noise, industrial, hip-hop, vocal…. it’s all there. Seamlessly. Think of it as a production. Perhaps a musical of the insane… but start to finish it’s complete brilliance. Pulling one track out makes no sense, as the release as a whole plays as a complete work. The musick is everywhere (gothick, metal, hip hop, ambient, everything), yet the release is incredibly cohesive. If you are interested in hearing bit’s and pieces then tune into Inner-X-Musick Radio… it should pop up some what frequently. -TBM

Two collections of strange ambiences, dystopian noisescapes and cinematic out-thereness from P. Emerson Williams, who periodically unleashes bursts of his weird sonic art upon the world from his Bond villain-style base in Florida. Actually, I made up the bit about the Bond villain-style base, but there's certainly a sense that this music comes from somewhere quite detached from the everyday world. If it doesn't emanate from the crater of a hollowed-out volcano, it should do.

Necrofuturist runs the gamut from the future-folk of 'Through The Fire' to the psychedelic voodoo ritual of 'The Vandal's Exquisite Corpse' - I'll be very disappointed if the back-masked voices on this one aren't reciting some sort of invocation to raise the dead. But then there's the brief interlude of 'Waltz', a strange country three-step, all chiming guitars, bent notes and echoes, like something the KLF would've put on Chill Out. Meanwhile, 'The Reflection' is all swelling, spooky drones, as if David Bowie decided to remake Low in Tibet. If this makes it sound like there's a bewildering variety of music here, that's because there is - but it all hangs together in a blur of ambience and iconoclasm and other-worldly grooves.

Salon Apocalypse is a yet more capricious beast. 'Still Bloody Action' mashes folk-disco with metallic mayhem; but, further in, 'Windows Blacked Out' sounds like the city's small-hours madness, recorded by dangling microphones from the top of a skyscraper. 'The Thing Is In Play' wrests things in yet another direction: stuttering, nervy, electro gives way - incongruously, scarily - to sounds of stress and conflict, half-heard through walls. This is the soundtrack to the film flickering in your midnight imagination. Be sure to lock the doors tonight. And stay away from the volcano.

We have the other two albums they’ve just released over the next two nights. To infinity and…somewhere else besides. -Uncle Nemesis 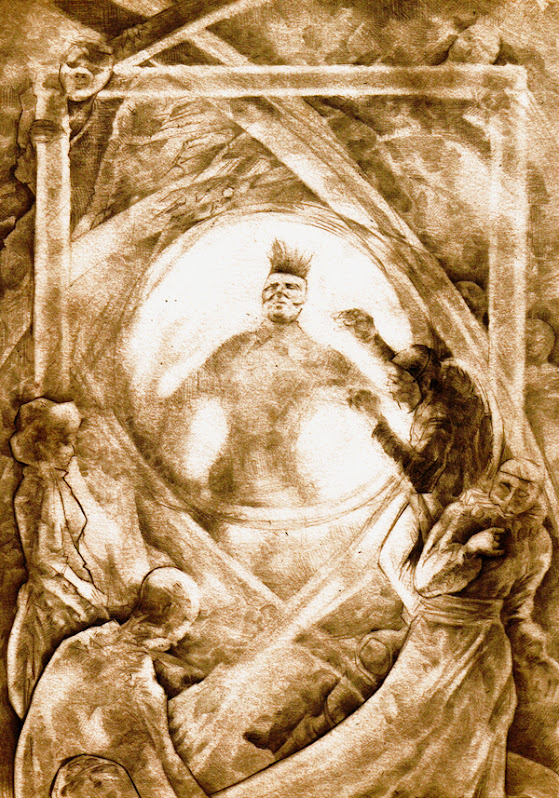 This where acid rock and Industrial-triphop fuse, where you try and make easy sense of it all and you lose. Worryingly, it does begin to make more sense the more you listen. The walls close in during ‘Still Bloody Action’ as the rhythm clashes with a set of vocals that make you think someone has woken Merlin. If that’s your sort of thing, read on…

Their collective lungs breathe out metal splinters in a confusing ‘Sleep, Cut And Run’ and I’m assuming that’s none other than Aidan McGoran on guitar, although it may not be, but he’s on here somewhere, and Pandora wheels away like an acid casualty cutting her safety chord on a space walk. There’s a different mood for ‘Intellectual Institutional Object’ as P. Emerson Williams rambles on like the Godchild of William Burroughs channelling Bob Dylan, offering a nice bit about ‘Devil to a half-Devil dissolve.’ Pandora’s got back into the space station and seems suitably contrite.

‘And The Beast Of The Vision Still Roams In Dream’ would appear to be a distantly observed orchestra balanced on an electricity pylon shrouded in fog. ‘Sepulchral Reminder (Torment Rose)’ brings in a solid beat as our vocal host sounds like a deranged headmaster as the sound falls in on itself, threshing wildly. (Imagine robots falling down very long stairs.) The psychedelic guitar motif that floats on high above ‘Nearer To Hell (Ideological Corpses)’ gives it all a stronger impact. At least we know we’re on Earth with a poisoned watery dance thing. ‘The Play Is The Thing’ appears to be a continuation, the guitar briefly evident before things tick into a slower, oppressive gear then disintegrates into am ambient maelstrom.

‘Nocturne’ is another thing entirely, windswept and ghostly, with some accommodating bass and fuzzy logic, all art dance friendliness. ‘Infinitude’ is a stripped down, pacey alt-rock avalanche, and ‘Seduction’ is a bit of a torch thing with Pandora waving the flaming torch a bit near your face and the music wandering into filmic horror.

We have the other two albums they’ve just released over the next two nights. To infinity and…somewhere else besides.

Posted by PANICMACHINE at 6:19 AM No comments:

As long as no Stalin breathes down our necks, why not make some art in the service of... an insurrection?

Never mind if it's "impossible." What else can we hope to attain but the "impossible"? Should we wait for someone else to reveal our true desires?

If art has died, or the audience has withered away, then we find ourselves free of two dead weights. Potentially, everyone is now some kind of artist -- & potentially every audience has regained its innocence, its ability to become the art that it experiences.

Provided we can escape from the museums we carry around inside us, provided we can stop selling ourselves tickets to the galleries in our own skulls, we can begin to contemplate an art which re-creates the goal of the sorcerer: changing the structure of reality by the manipulation of living symbols (in this case, the images we've been "given" by the organizers of this salon -- murder, war, famine, & greed).

We might now contemplate aesthetic actions which possess some of the resonance of terrorism (or "cruelty," as Artaud put it) aimed at the destruction of abstractions rather than people, at liberation rather than power, pleasure rather than profit, joy rather than fear. "Poetic Terrorism."

Our chosen images have the potency of darkness -- but all images are masks, & behind these masks lie energies we can turn toward light & pleasure.

For example, the man who invented aikido was a samurai who became a pacifist & refused to fight for Japanese imperialism. He became a hermit, lived on a mountain sitting under a tree.

One day a former fellow-officer came to visit him & accused him of betrayal, cowardice, etc. The hermit said nothing, but kept on sitting -- & the officer fell into a rage, drew his sword, & struck. Spontaneously the unarmed master disarmed the officer & returned his sword. Again & again the officer tried to kill, using every subtle kata in his repertoire -- but out of his empty mind the hermit each time invented a new way to disarm him.

The officer of course became his first disciple. Later, they learned how to dodge bullets.

We might contemplate some form of metadrama meant to capture a taste of this performance, which gave rise to a wholly new art, a totally non-violent way of fighting -- war without murder, "the sword of life" rather than death.

A conspiracy of artists, anonymous as any mad bombers, but aimed toward an act of gratuitous generosity rather than violence -- at the millennium rather than the apocalypse -- or rather, aimed at a present moment of aesthetic shock in the service of realization & liberation.

Is it possible to create a SECRET THEATER in which both artist & audience have completely disappeared -- only to re-appear on another plane, where life & art have become the same thing, the pure giving of gifts?

We take Kirkegaard's "leap of faith," but absent the old existentialist's Fear & Trembling & Sickness unto death. Our leap of faith into sorcery & secret theater is more like a wet dream than a nightmare, "awe-full", not awful.

Posted by PANICMACHINE at 8:49 AM No comments: